Happy Monday! I’m fedellen and welcome to my 11th weekly devlog. Our main goal this week was to get a version submitted for Apple Review, which I’m planning to submit tonight actually. To complete that goal we had many other tasks to finish up which included creating screenshots, improving our descriptions, working on our trailer, updating a few graphics, and even porting in several more tracks from Abstraction Music. On top of all this we keep finding more and more little bugs to knock down on our pursuit of a suitable v1.0.

Much of the week was spent working on improving and polishing our App Store page material. In order to obtain some nicer looking screenshots for Apple specific resolutions I was able to successfully compile certain screen sizes with Stencyl and scale them up in Aseprite. We explored the possibility of using the same technique for App Previews but it seems to be out of our scope still. During this exercise I was also able to playtest and polish the game for all of these unique sizes.

In addition we’ve been tweaking our descriptions, subtitle, and keywords. We’re still looking for any feedback we can get on our our wording and the game’s landing page. While we don’t intend to release Sonar Smash for a couple more months, we will be using all of this material in a marketing push to announce our release date. Also, these are pretty close to the exact descriptions we’ll be using for our Apple feature submission form that we’ll be submitting upon a successful Apple review. All of this also unlocks pre-orders and rewards us with hyperlinks to our game.

As Sonar Smash is coming to a bit of a close, we’ve been looking forward to our next projects. One of the projects for me is a little update to Astral Defense. With the programming being fairly complete for Sonar Smash, I’ve found myself little bits of empty time to start digging in and fixing some issues. I intend to greatly increase the pacing of Astral Defense, port our touch controls system over, and prepare a cross-promotion button that will link to Sonar Smash.

​We have several ideas for our next few games and currently plan to make a unicorn themed endless runner. Unicorns were the theme for our first intended title, Adventure of Duck Guy, so it’d be a shame to make so many non-unicorn games. We’re keeping the scope very small for this one in an attempt to develop it swiftly. For the first time I’ve also been filling out a game design document and doing market research before starting the project. We don’t intend to slow down making games and a personal (stretch) goal of mine is to have four released mobile titles by 2021. 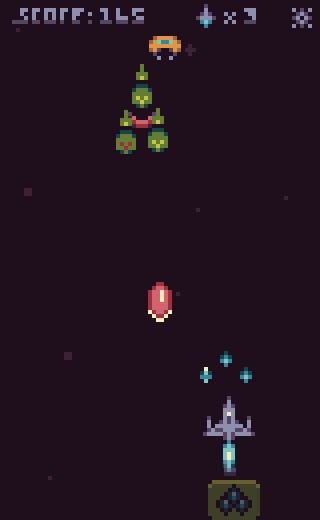 As I intend to submit v1.0 for review tonight I don’t have many concrete goals ready for next week. If unsuccessful I’ll be spending some time resolving the problem and resubmitting. Otherwise we’ll have time to finish up the Astral Defense update, improve our game design document, and possibly begin the concept stage. The later really depends on our creative energy and certain ice dam related roof leaks. An ongoing goal of mine will be to continue marketing Sonar Smash to the best of my ability.