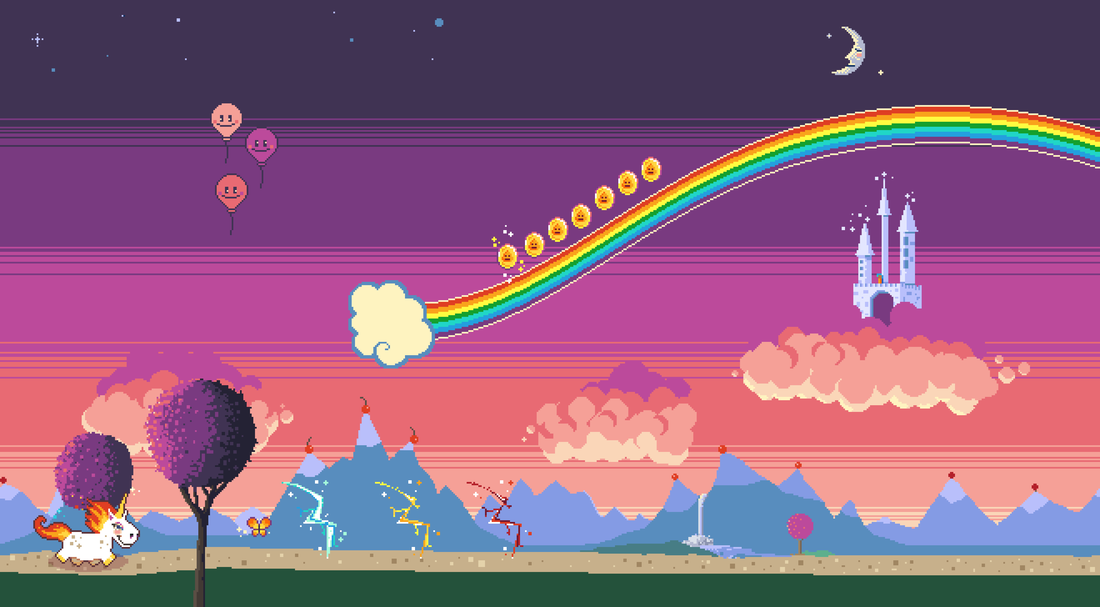 Hello, I’m fedellen and welcome to 13th weekly devlog! We had two separate goals this week which involved prototyping/sketching our unicorn runner and a full on marketing push with our release date announcement of April 8th for Sonar Smash. Both of these goals were smashed with many flying rainbow colors. abonbon has created some beautiful concept sketches for our next project, I have an initial prototype with functioning rainbow rails, and we scored four new Sonar Smash articles: Pocket Gamer, Droid Gamers, TouchArcade, and Northern-Gamer.

It feels really good to start putting some code into a fresh new project. Over the course of all of our first three projects I’ve learned so much and I know I’ll learn even more from this one. We’ve decided to expand both our resolution and our palette for this magical adventure. Astral Defense and Sonar Smash were created at 80x140px with 16 colors. For this project we’re going 660x360px and 64 colors for right now. This will probably adjust later depending on how certain screen sizes shape up and whether we want some more colors for different elements.

abonbon has delivered on some amazing concept art that we’ve slowly been importing to our functioning prototype. I’ve also been playing around with different several movement formulas quite a bit this week. Our intent is to have one button control to jump or rainbow boost. The player will have a Rainbow Meter of sorts with two “boosts” which will regenerate rainbow power slowly while on the ground, rapidly while on a rainbow rail, or instantly from rainbow pickups. There is still lots of work to do, but grinding on rainbow rails in my early alpha build is certainly fun 😀

Our Apple review was initially unsuccessful due to them being unable to find the restore purchase button; but we quickly appealed with it’s location and they approved. This unlocked the ability to open up pre-registration on all platforms and rewards us with store pages we can hyperlink to. Since we’ve already done a marketing push, our press kit and marketing material was fairly easy to update with fresh new screenshots and numerous description fixes.

With a super juicy new trailer from abonbon, I put my marketing hat on and sent out about 8 emails to press contacts and tip lines on Friday night. I also posted the trailer with links to our store pages on all of our social media pages. In hindsight, I probably won’t send emails on a Friday night ever again. There was a big empty space over the weekend and I initially chalked it up as a timing mistake and assumed none of my emails hit the mark.

Huge surprise for me on Monday morning when I googled Sonar Smash and found three new articles. Going into this marketing push I labeled Pocket Gamer, Droid Gamers, and Touch Arcade as my “big 3” for mobile news publications. We smashed ALL three and I’m constantly in fist pump mode right now. While none of the articles seem very special, any news is great news as an indie. This feels like a monumental victory right now but I’m still looking ahead at our next goal: an Apple feature. 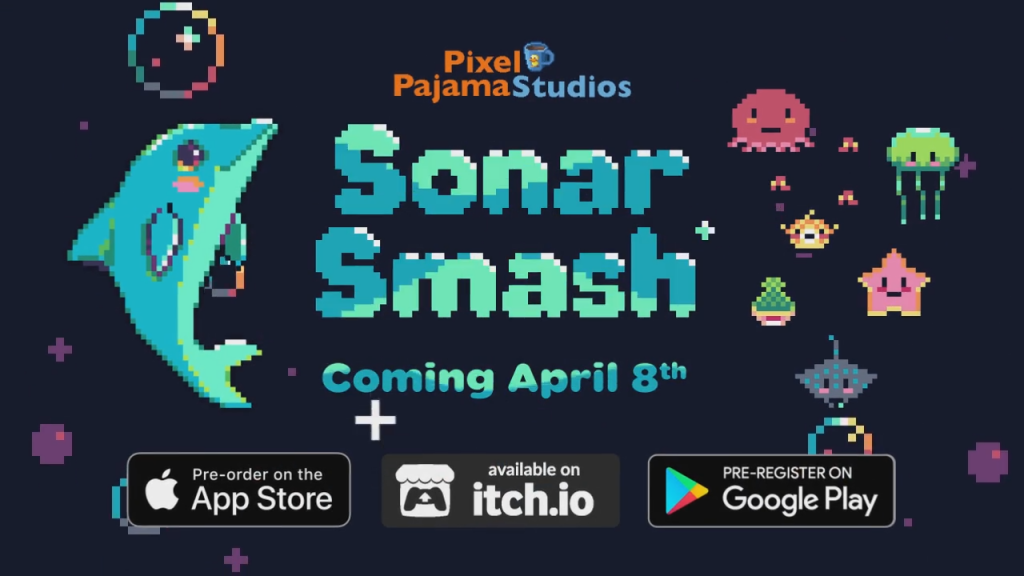 Our goals next week are pretty open ended with being in the concept stage. We have many more mechanics to put faces on including obstacles, background elements, ui elements, and many more unexpected things we’ll probably come up with. I have lots of playing around to do with the code on our planned features. On the other side of the coin we have a bit of marketing work to do for our Sonar Smash Apple feature submission. Not only that but we can now spam our store page links in all the places, so if you’re still reading this should probably go pre-register for free on the App Store or Google Play, or pre-purchase the desktop version on Itch.io.